Imagine Corinne Bailey Rae arm-wrestling Sade at Chaka Khan’s pool party, and you’ll get an idea of Julie Mahendran’s music. Her clear and powerful vocals are so inspired by the Jazz greats like Ella Fitzgerald and Sarah Vaughan; the greatest pop voices of the eighties like Whitney Houston; as well as the soulful sounds of the seventies. Julie also loves singing and writing “vocalese”- lyrics to instrumental songs and solos, inspired by the likes of Jon Hendricks and Annie Ross.

A Canadian born in Montreal, raised in Edmonton, and currently residing in Toronto, Julie completed her Bachelor of Music at world-renowned Berklee college of Music, studying with Cheryl Bentyne of the Manhattan Transfer and having performed for Herb Alpert, Patti Austin and Benny Golson. Julie’s first album, NEVER DO WITHOUT YOU, is a tribute to classic Jazz. It features unique treatment of songs such as “On The Street Where You Live” and “Calling You” with instrumentation of just voice, bass and drums.

Exploring the 70s and 80s music of her childhood inspired her second CD, LOVELIGHT, and reveals her influences in a smooth, groove sound. In addition to four of Julie’s original tunes, she has crafted unique arrangements of songs that were originally performed by artists such as Bill Withers, Cyndi Lauper, and Annie Lennox.

Julie has performed throughout North America, in Europe, and in Hong Kong at the Four Seasons Hotel as the featured artist in the Blue Bar. Both of Julie’s CDs have received rave reviews and jazz radio airplay worldwide.

Get a free song! 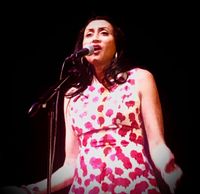 We Walk The Line: A Tribute To Johnny Cash

Julie sings the role of June Carter Cash in this tribute to the music of Johnny Cash.